Well, That Is Over...And I Feel...Better 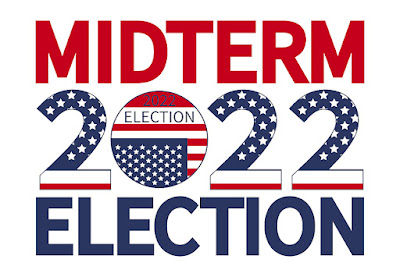 Have you noticed..no more barrage of political ads filling your TV screen? Is your mailbox a little less full of those staged shots of someone with their family looking sincere and serious? Has your favorite news source stopped quoting the results of new polls every day?

November 8th has come and gone. When I looked out my front door this morning everything was still in its proper place. People were still walking dogs and pushing strollers with toddlers aboard. Amazon, UPS, and FedEx trucks continued their constant parade up and down the street. The sun still appears every morning and seems to sink below the horizon around 5:30 each evening. Not believing in a flat earth, I realize the sun isn't moving, the earth is.

Yet, just days ago the headlines would have us believe the end is near. Our life is destined to be turned upside down. A Red Wave would wash over us and a new day would dawn.

Oops...didn't happen. Actually, it was barely a pink puddle. For the first time in decades, the party holding the White House didn't suffer huge losses in both House and Senate. As I type this there are still races to be decided at all levels, with continued control of the Senate still well within Democratic reach while the House is likely to turn Red. Several governor races flipped to Blue and the number of female governors hit an all-time high.

The point of this post is not to gloat over the results, though I am pleased that things turned out much better for my preferred candidates than the polls and pundits led me to believe were possible.

Rather, this election seems to signal that the turmoil, rancor, misinformation, and hostility may have reached a tipping point for the majority of American people. I have read a description of this election as a move toward normal. Ticket-splitting was clearly in play with not everyone voting strictly along party lines.

I am not naive. I fully expect the grandstanding and politicking to continue in Washington and elsewhere; that is how our system works. Opposition is a must to keep those in power in check. There must be debate, dissent, and loud differences to allow all views their day in the sunshine.

But, the level of distrust and bitterness, of literal hate for the opposition may be doing a slow fade. I completely understand your disappointment if your chosen ones did not prevail. Talk to me about 2016. Supporting the losing side has happened many times in my lifetime. Yet, never have political differences been so likely to spark violence.

Remember the 2000 election when the Supreme Court gave the election win to George Bush over Al Gore. The two men were separated by a literal handful of votes and hanging chads.

November 8 (and counting) gave me a new sense of optimism. We are not likely to return to the 2000 level of interaction anytime soon. But, I really sense the pendulum has swung as far as we will let it in one direction. Now, just like in life and history, it will inevitably move back toward the center.