I Miss This Hobby 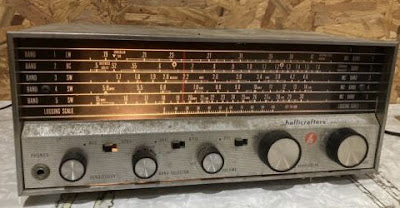 Growing up, I had a few hobbies that filled time that wasn't taken up with music lessons, band practice, dealing with two younger brothers and school work. But none grabbed me quite as firmly as shortwave radio listening.

I guess I was about twelve when I was given my first shortwave radio. I still remember it was made by a company, Lafayette, that no longer exists. About the size of a kitchen radio, that electronic box was a window to the world and the beginning of a lifetime of connection to radio and the endless excitement of broadcasting.

To most folks today, shortwave radio is probably an unknown concept. Except for an occasional reference in a World War Two movie about spies and transmitters hidden in suitcases, the idea of sending a signal into the atmosphere for someone else to receive it seems downright silly. The concept seems so haphazard.

Yet, there was a time not all that long ago that was how a lot of people received information. Governments broadcast information to enhance their image in the world, news and documentaries were aired, and even religious groups spread their messages on what was known as short wave broadcasts.

Though called short wave, these radio signals could travel thousands of miles. A broadcaster, like the BBC or Voice of America, would have transmitters all over the world, sending signals that anyone could listen to, usually in their own language. Before computers, the Internet, smartphones, or social media, a  $30 shortwave receiver would connect someone to the world.

Growing up, I became hooked on tuning in all the strange and exotic broadcasters. Radio Havanna, Radio Canada International, Radio China, Radio Australia, Radio Moscow, and Switzerland Radio became my nightly companions. Heavens, (pun alert), even the Vatican had its own broadcasting wing.

Most countries in Africa or the Far East were easily received and always offered at least some daily programs in English. Those spreading their version of the Gospel used radio to reach and, hopefully, convert, anyone who tuned in.

There used to be an annual book, about the size of a 300-page novel, that listed every broadcast from every country and when they were receivable in the United States. That was my ticket to a hobby that enthralled and educated me for years.

Today, the world of shortwave broadcasting has virtually vanished. Yes, The British Broadcasting Company (BBC) still sends its messages to various parts of the globe, but its antennas no longer point toward the U.S. It is illegal for The Voice of America to broadcast a signal that can be heard here. Radio Havanna in Cuba, and Radio China are still out there but in very limited ways. Religious sects, primarily fundamentalists, are about all that is heard anymore.

Why? Shortwave broadcasting is very expensive. Whether a program can be clearly received depends on the atmospheric conditions required to allow a radio signal to travel from here to there. Multiple arrays of antennas, soaring hundreds of feet in the air, were necessary, as were several high-powered transmitters and the costs for all the people who worked there.

Broadcasters realized the Internet provides a much less expensive and more dependable way to make all that programming available to anyone with a computer and an Internet connection. But, "listening" to the music programming from Findland on a secure Internet connection destroys the excitement of pulling that same program "out of the air," knowing it traveled thousands of miles to get to my ears.

Shortwave listening, or SWL as it is known, is gone. I mourn its loss and miss that important part of my younger years. I am still somewhat involved in Amateur, or ham radio which uses the same radio frequencies. But, my talking to someone in Canada or Hawaii isn't the same as snagging a station from Ethiopia or New Zealand. That thrill is gone.

Your turn. What hobbies excited you at some point in your life but are either no longer viable, or you simply moved on? What interests helped shape you when you were growing up? Is there a passion you had all those years ago that you have recently rediscovered?