How Is Inflation Impacting You? 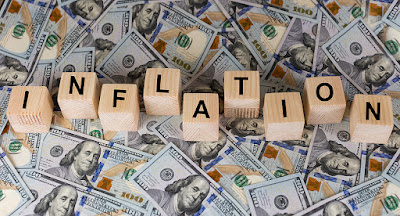 Are we in a recession? Is the housing market in the midst of a correction? Are the prices at the store changing your buying habits? Have you dropped something from your normal routine because of the cost?

How about retirement? Particularly with a fixed income, the relentless uptick in prices has likely caused a rethinking of what lies ahead.

If so, you are not alone. A new study from Magnify Money reports that 50% report inflation has impacted their retirement strategy, More than half of us report delaying a financial milestone for now. Over the last two years, 20% of us have had to take money from our retirement accounts to cover emergency expenses. If you'd like to see the full study click here.

Personally, the Lowry household has made some adjustments. Between the higher food and gasoline prices, plus the uncertainty and costs of air travel, our shopping lists and plans for the future have been modified or even canceled. The last few months of wild swings in the stock market haven't helped our sense of stability.

The most obvious shift for us has been at the grocery store. We had already reduced our meat eating; the price stickers have accelerated that change. Once a week something involving a read meat is all we are comfortable with, both for cost and health reasons. Chicken has gone way up in cost, too, but it remains an important part of our week's planning.

Eggs have left the building. Usually, we buy just a half dozen a week, for a fried or hard-boiled egg, or maybe a recipe.  With the price for six eggs 300% higher than last spring they are much less likely to be on the list. Pasta, fruits, vegetables, salads, a chicken-based something, and homemade soups are now the bulk of most week's planning.

In a stroke of good luck, we bought a hybrid plug-in car last March. 26 miles of range on electricity covers most days' worth of errands and trips.  We rarely have to switch over to the gas engine, sometimes doing so just to keep the gas from going bad or deposits forming. In eight months we are only halfway through our third fillup. The old SUV, with its 20 miles per gallon habit, is used only when absolutely necessary.

An expected trip to Portland was shelved earlier this year due to an impending railroad shutdown. Even though the strike was settled at the last minute we had already canceled everything. We lost close to $1,500 in cash, and have $2,100 worth of credit that must be used or will be lost, too.  All this put any additions to our travel budget in a rocky position for the next 12 months.

Occasional periods of inflation are normal in our economic system. Stock markets go up and then come down. Housing prices form a bubble and then drop closer to earth. Those egg prices will eventually return to a more normal level. Being humans, we tend to forget about the cycle and always look for someone or something to blame.

This time there are some obvious inflation drivers: the effect of the Russian invasion of Ukraine on energy costs, the overspending, by us, on almost everything after two years of Covid shutdowns exacerbating supply and demand issues, a series of Federal Reserve inflation decisions that were slow in coming, and some government stimulus programs that pumped a serious amount of cash into a system still unstable from the pandemic.

Whatever the reasons this time around, I am interested in how it is affecting you.

Inflation is part of life, but that never makes it easy.