Truth and Wishful Thinking: How We Confuse The Two. 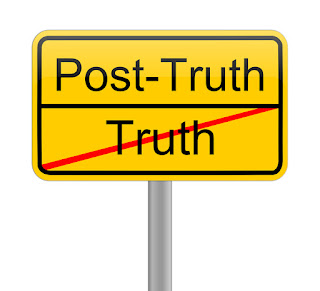 Nothing is as it seems. What I know to be real, believe to be true built on my reliance on facts is apparently passe. It's official: Truth is dead.

The latest edition of the Oxford Dictionary has made it official. Post-truth now has an explanation: "objective facts are less influential in shaping public opinion than appeals to emotion and personal belief."
Of course, that definition is post-truth, so it may or may not be true. The Oxford Dictionary may be a propaganda tool written by the liberal media, the alt-right, conservative pundits, or some unknown Russian hacker.
And, therein lies the problem that has me scratching my head. If "truth" or "reality" are no longer what they have always been, how does one separate the wheat from the chaff? How does one construct a rational response to events when rationality is under attack?
Is Mars really populated by little green men (and women)? If enough people on the Internet claim it to be so, then does that makes it so? Did we go to the moon, or just stage a launch in a studio?
Is there a child sex ring being run from the basement of a pizza restaurant by a former presidential candidate? Is the fact that the restaurant doesn't have a basement relevant?
Is the government planning on installing microchips in our arms the next time we get a flu shot? Did Covid come from alien 5G signals? Is the earth flat, or round?
These examples are absurd, at least to me, but believed at some point in our history. They gained traction with our fellow citizens. No matter how bizarre or disconnected from how we think the world and its citizens operate, any statement has the potential to be accepted in a post-truth world.

So, how do you determine the difference between what is downright silly or ludicrous, and what are true, meaning facts with reality supporting the premise? At the risk of being seen as part of a plot to deceive, I offer the following suggestions:

1). If something seems too far-fetched to be true, then do your research rather than accept it as presented. Most of us agree that if something is too good to be true, like a Hawaiian vacation for $99, then it probably is a scam. Use that same discernment with news or "facts" that raise questions. Something important can be found in multiple sources, not just one that is re-tweeted or shared over and over.

2) Realize that truth or facts are not dependent on what you believe. They are independent of emotions and beliefs. An inconvenient truth is still true.

3) If someone claims to have a simple answer to a complex or difficult question that has bedeviled humans for a long time, question that solution. Complex problems do not have simple answers, especially those that can be summed up in a 280-character tweet or 30 second TV commercial.

4) Does the story attack a large non-specific foe, like Big Government, Republicans, all liberals, or The Media? Such broad-brush revelations are very rarely based on fact, but much more likely on emotion or a particular agenda.

5) Accept that uncomfortable "truths" may require you to change your worldview or opinions about something. To ignore or deny simply because you may have to change is done at your own peril.

6) "Truth" does not change over time: the world was flat for thousands of years until the truth of its roundness became obvious. The world was always round; people just didn't have the tools or mindset to accept it. What changes is our awareness and understanding of what is true, not the truths behind it.


With all that being said, I would add a suggestion: question everything. Just like the round world example, question what you believe at every turn. The "truth" as you know it may be wrong, or not fully understood. Be ready to adjust to new, credible, information.
It is not easy, it goes against human nature. But that is the only way we evolve as a species: to separate fiction from the truth, rejecting the former while embracing the latter.
Now that we are knee-deep in the alternate reality known as the American political season, this may be the perfect time to see if you can tell the difference between what is real and what is just convenient or comforting to believe. Your detective skills will be needed constantly for the next few weeks.
If you are really looking to become confused and irritated at the human tendency to believe pure silliness, read Off The Edge, a book about the Flat Earth belief system and its continued presence in the (round) world. I found this an eye-opening look into why we believe all sorts of bizarre conspiracy theories that treat truth and facts as irrelevant.

Be safe out there, people. Not everything is as it seems.