It is Up To Me 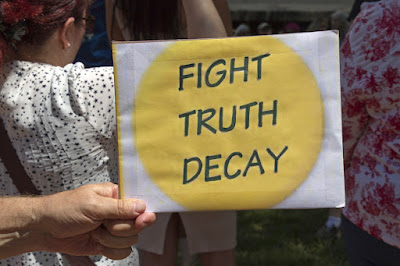 Somewhat strangely, I find the results of a recent poll to be encouraging. I guess that speaks volumes about the world in which we find ourselves, but I will take what I can get.
A national poll indicated that 91% of adults believe the spread of misinformation is a problem. More of a surprise was the political consensus: 80% of Democrats and 70% of Republicans say that misinformation tends to enhance extreme political views. Those interviewed also agree that hate crimes and violence based on race and gender are negatively affected by untrue statements.
So, there is a strong majority who believe that misinformation is wrong and dangerous. An important unanswered question, though, is who is the source of this dangerous tactic? Do those in one political party blame those on the other side of the aisle? I can't find the answer to that inquiry in the study recap. Even so, logically, I am willing to bet that, yes, the source of misinformation is often believed to be one's political enemy. And, that is a whole other issue and post.
But, let me focus on a rare point of agreement among our fellow citizens: misinformation, non-truths, exploitive exaggerations, and statements taken out of context are harmful. The study does identify the Internet and social media as the primary source of this stuff.  In fact, up to three-quarters of those asked said they have not forwarded or shared something because of questions of its legitimacy.
From these points of consensus maybe there is a way forward, a path that isn't littered with truth decay. There are a few steps each of us can take before we hit the share button, repeat something we heard from a friend, or believe the oft-repeated story on the Internet. While it feels good to validate our beliefs about some particular evil or nefarious activity, there is some understanding of the potential for making things worse.
One way is to "fact check" something that seems too good to be true, or maybe too outrageous to be real. Most of us wouldn't click on the tab that promotes a $99 roundtrip to Hawaii, there is clearly a catch or a scam involved. Using that same sense of logic, it isn't hard to discern the truth behind that titillating headline on social media or the "I just heard" comment overheard at the grocery store.
Start here: The Arlington Heights Memorial Library has an excellent overview of fact-checking and links to a few of the most-trusted sites.  In particular, I like the CRAAP Test. You know the "if it walks like a duck, quacks like a duck...." The CRAAP acronym helps you use your own natural intelligence and common sense to uncover that "duck."
The Associated Press has an extensive website that reviews not only the most talked about stories of the week but basic educational information on things like using absentee ballots and election rules...particularly important leading up to November 8th.
A fascinating resource is Medawise. This non-partisan outfit offers free tutorials on how to spot fake news from any source and make yourself a more discerning consumer of information. It has a separate Teen Network for helping young people navigate the dangerous waters of social media. something a grandchild or a parent might find helpful. There are sections designed especially for seniors. It is worth taking a look.
An approach I find helpful to separate the real from the fanciful is to read from several sources on each side of the major political divide. Look for key giveaways like "alleged," "one source reports, "unconfirmed information." Each of these gives me a clue that the story or piece of a story is potentially speculative or unproven. Those trigger phrases prompt me to check more sources to see who else may have more details.
If I can't verify what I have read, I do not resend it, repost it, or use it as the basis for a snarky putdown on Facebook. I am not saying this statement is untrue, I am simply refusing to further its spread until I am convinced of its veracity.
If the poll numbers I quoted at the beginning of this post are accurate (and I did check that this story was not from just one source), then the bulk of us understand the harm misinformation can cause. As individuals, what we can do is not be part of the problem by spreading, amplifying, or keeping alive something that can hurt people.
I am quite aware that there will be some who read my words and suggest I am naive. "They" want me to put a lid on the spread of important facts. Fact-checking is run by the "them" who want to keep us powerless. Even though it comes from two very well-respected organizations, this poll is bogus.
I have no magic words to change that way of seeing the world. I cannot make conspiracy theories or fear of "The Other" go away. What I can do is not be part of the mechanism that spreads fear, mistrust, lies, half-truths, and offensive BS.
Republicans, Democrats, Libertarians, Independents, apolitical folks....the labels don't protect us from truth erosion. Incendiary rhetoric can come from anyone at any time.
All I can do is try to keep myself from being one of the sources. I am asking you to consider doing the same.
By Bob Lowry at October 24, 2022