The Old Model of Retirement...Not For Us! 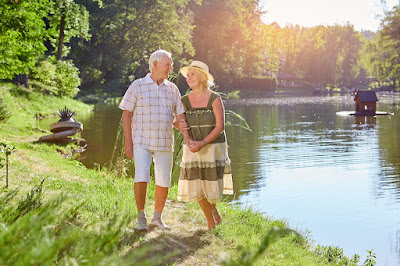 The best approach to your retirement is with a mindset that this stage of your life will be uniquely yours. In most cases, it won't look all that much like your parents' or older relatives' retirement. While there are always exceptions, I think most readers of this blog would agree that how our parents' generation chose to spend the years after working doesn't do much for us.
The focus on leisure or just filling time holds little appeal. The slow shutting down of the mind and body as inevitable, doesn't fly. Most of us prefer to stay active, both mentally, and physically, as long as possible. We do not deny the reality of aging. Instead, we are making the most of each phase of retirement. As a door closes, we look for another door to open.

Because it is the only one I know well, I will use my parents' version of retirement as an example. Know that I loved my parents deeply. They were tremendous examples of 63 years of marital fidelity and dedication. I raised my daughters based on the principles I learned at home. As I told my mom shortly before she died in 2010, I have no bad memories of my childhood.

But, as I move along in my 21st year of retirement I have a solid perspective on their approach versus mine. There are significant differences. After retirement they:


It is important to understand that I am not making a value judgment on their choices. They seemed genuinely happy in how they lived. I think that they believed retirement was a time to do what they had been doing before, just less of it. They led their lives through my family as it grew and matured. Reading, singing in choirs, and watching the Phoenix Suns on TV filled most of their time.

Mom did volunteer as a teacher's aide at an area school. As a school teacher for over 30 years, that was something that she would not give up until her health became too fragile. She tried computer e-mail but went back to written letters rather quickly.

Dad absolutely refused to even touch a computer - a little unexpected from a man with an electrical engineering degree who sold technology equipment for a living! Like almost all men in his social circle, he played golf twice a week but became bored and dropped the sport when costs started to escalate.

The friends they had were primarily the ones they left behind in New Jersey and Massachusetts. Dad's reluctance to become involved in any social activities in their new retirement community meant few local friends to spend time with. As the years went on, Betty, our kids, and I formed their relationship circle.

They did travel both abroad and around the United States during the first decade or so of their retirement. I may have gotten my RV "bug" from them since they loved to take month-long driving trips at least once a year. During the time Betty and I owned a weekend cabin in the mountains north of Phoenix Mom and Dad enjoyed spending time there with us.

They remained loving and supportive to us, always available to help or offer financial support when needed. But, they pretty much stopped any personal growth or exploring new things. As mom's health deteriorated their world shrank around them until it was just a procession of doctor and hospital visits, and the room in the nursing home. Dad did begin oil painting but stopped when they moved into a retirement community. That was a shame; he was showing real progress.

After Mom's passing Dad became even less involved. The community where he lived offered a full range of discussion groups, movie and concert nights, trips to local museums, exercise sessions, aquatic classes, a full fitness center, and bridge classes. He did not take part in any of them. Instead, his days were filled with reading an endless procession of mystery novels.

Except for two meals a day and lunch with us once a week, he rarely left his assisted living apartment. We tried to get him more involved, even taking him to a concert of big band favorites, but he wanted to leave after the first song. I'm not sure if it was the noise, the other people, or simply a change in his routine. But, trying new things was simply unacceptable. Even offering to take him to a restaurant away from the community was politely refused. He died at the ripe old age of 91 in 2015.

I don't think the way he lived was entirely due to mom's death. His interest in other people or activities was always only a reflection of what she wanted to do. Without her presence, he has no one to force him to do much of anything.

I admit I was frustrated by my Dad's refusal to try or experience anything new. I don't understand how he could be satisfied with simply existing instead of living. His short-term memory and hearing were slipping as he aged, but his overall health remained good until the stroke that killed him. He could have participated in all sorts of activities, either with a group or on his own. But, nothing interested him enough to leave his easy chair.

The message I finally learned to accept was that he was entitled to live the last years of his life as he chose. If he was uncomfortable with anything different then I had to abide by that choice and stop worrying that I was not doing enough to make his life fuller. Our retirement journey is unique to us. My view of what he should have done is invalid.