Income Inequity: How Does It Affect Seniors? 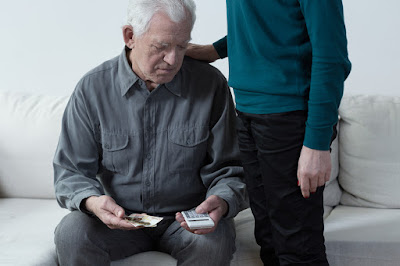 Several years ago, I asked why it is such a struggle to save enough for retirement. The post gave some reasons which are part of the human condition. We procrastinate or make excuses. One comment, though, has stuck with me ever since. That reader suggested that too many don't save because they can't: there is barely enough to survive, much less invest for the future. Factor in this year's bout of inflation right after the pandemic mess, and her point is even more valid.
She is right, of course. For those lucky or privileged to enjoy a satisfying retirement, and I am definitely in that category, the problems she identified are hard for many of us to grasp. In fact, the reaction may be to blame the person who isn't doing well for their own fate or lack of planning. But, stepping back for a moment and looking at what is happening in our society may bring a fresh understanding to these struggles.

It is not new information that income inequality in the United States is increasing. The rich control an ever-increasing share of the nation's (and world's) wealth, while many middle and lower-class folks find themselves drifting sideways or declining in economic terms. Recent figures suggest the top 1% control 33% of this country's wealth or more than the country's entire middle class. In the last year, these privileged few gained $6.5 trillion in wealth.

What is of particular concern to readers of this blog is that among seniors, the economic inequality is growing faster than the population. While all studies don't agree, there are solid projections that at least 15% of households with someone 65+  live below the poverty level. That percentage grows with age.
The loss of many well-paying jobs and the virtual elimination of employer-funded pensions are significant factors. Less than one-third of today's workers have a retirement plan at work that isn't wholly self-funded.
Wage and benefit inequalities follow us from the working world into retirement. With fewer resources to save and no help from employers, the cycle of falling behind starts early and worsens as we age.

Social Security has had minimal COLA increases for the last few years. The bump for 2023 is projected to be substantial but, probably not enough to provide much relief with inflation or increases in Medicare premiums likely.

Relentless increases in health care costs affect retirees just as the need for those services grows with age. A new law that allows Medicare to negotiate lower drug prices will help. Cheaper insulin shots will be welcome. A cap on yearly personal drug expenses is good news. But, the fact remains our health care system is designed to produce profits before healthy people.
The percentage of the population that is medically obese is higher in the United States than in any other developed country. Some of that obesity is self-inflicted, and some is not. Regardless, this serious health risk is more prevalent among the poorer segments of society, putting an even more significant strain on economic conditions.

Lower-income seniors must depend on less-than-sufficient savings and Social Security to get by. The luckiest ones may be able to lean on their family for extra help. But, such is not the case for most. America has the self-image of being the wealthiest nation on earth, yet, that richness is very concentrated among a few. Too many on the fringes must fend for themselves or do without.

I don't have a magic answer to balance things out. There is no snap-of-a-finger solution. There are some common sense steps to take, but they require more awareness of the problem than we have exhibited recently. They will need  for us to admit that we have a problem that is having severe consequences for our social fabric, an issue that is getting worse over time.

Any specifics that I list could open the door to a political tug-of-war, something I'd rather avoid. But, in general, policies that encourage retirement savings through tax-advantaged programs, incentives for employers to strengthen retirement savings accounts at work, and a tax code that doesn't tilt the playing field so obliviously toward those who are doing just fine would help. Strengthening the support system for those who struggle with medical care seems like an obvious step.

Our economic system of capitalism has always produced winners and losers. Some people will be poor stewards of their resources and not prepare for their future. Those are not the people I am writing about.

What is happening now is the senior, the retiree, is becoming one of the most vulnerable segments of our population. In addition to expressing your feelings to your representatives and voting your beliefs, I urge you to look for ways to be more personally engaged.
Help an aging family member or relative who is struggling. Find some time to volunteer at a senior center or hospice organization. Decide that some of your charity donations next year will support struggling seniors. Help a senior prepare his or her taxes, so expensive mistakes aren't made. Visit a shut-in with a meal every once in a while. Walk an elderly neighbor's dog or offer to take a pet to the groomer.
As individuals, we can't solve the income inequality dilemma. But, as people, maybe we can find a way to help a struggling senior find a bit more joy in life and ease a person's burden even just a little.