Being A Good Citizen 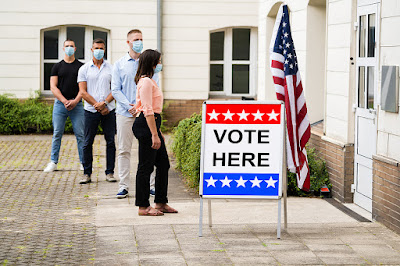 Is it just me, or does the political "season" never really end? Some of us are still trying to relitigate the 2020 results, while the primary season for 2022 is well underway, and those with the desire to take the top spot in 2024 already making noise.
The public hearings concerning the January 6th insurrection attempt (that is what it was, like it or not)  are not changing opinions that have solidified over the past 18 months. Our country is in the grip of tribalism with factions hardened into solid rock.
The hearings did bring to mind a post I had written several years ago. In light of what has happened since it was originally published, I have rewritten parts of it to reflect my feelings today, in the summer of 2022. This country can not continue to exist in its splintered form, much less prosper, if we expect leaders in Washington or the state capitols to do all the heavy lifting, while we are just along for the ride.
A citizen has responsibilities, too. We cannot take the position that politics is a dirty business, the people often self-serving, and I can ignore it all while just living my life without paying attention to all that stuff. The obvious flaw in that argument is all the effects of those faraway decisions (or lack of them) do affect you, every day.
Given all the struggles and impediments that exist at the moment, we still have to evaluate and pick those who we hope will do the best job. We have to be part of the "team" on the ground, working to correct mistakes or flawed decisions, promoting our vision, and not sitting back only content to blame the system.

So, here goes. What are our "qualifications" to take part in this grand experiment known as American democracy?

1) Commit to being educated. I would argue this is the most important requirement. A citizen must take the time to learn about the issues, to think deeply about the problems and opportunities we face, and avoid the tendency to accept whatever the media or our favorite talking heads have to say. Even something as seemingly simple as a primary requires work.
Example? There are five people on the August ballot to be on our city council. I am to pick three. I have never heard of any of them. So, I took the time to pull up the statements and web pages of each. After reading what their backgrounds were and what they thought were the key problems facing Chandler, AZ, I was able to choose the three that I thought would be best for the job.
Just because something is on the Internet, TV, or radio does not mean it is accurate and true, though it may be. A citizen's responsibility is to dig deeper. Consult multiple sources for insight including those outside your normal comfort zone. Talk to others, and form your own opinions but be prepared to change what you think if new information becomes available. Rigidity is not compatible with education.
2) Commit to participate. Did you happen to notice the news stories about record low turnout in two recent political contests? Not voting makes you no better than a non-citizen. Not supporting candidates and issues you believe in leaves you no right to complain about the outcome. Of course, you have every right and responsibility to advocate for or against things you feel passionately about. But, if you don't play in the game, you can't complain about the score.

3) Commit to support or deny support as appropriate. Even if your dream candidate wins, even if every ballot proposition that you support passes, your duties are not over. There will be people, maybe lots of them, who disagree with you. You must work to support what you think is important and withdraw your support if someone or something doesn't seem right.

As the next point states, that doesn't mean you stop paying taxes if you dislike the IRS. It doesn't mean you occupy a federal building to protest a policy you find odious. It does mean you vote against people or things. It does mean you legally protest, with signs or petitions. You use your money and time to support or deny support.
A democracy will always have disagreement among well-intentioned people on both (or multiple) sides of an issue. Don't demonize those with different viewpoints. Work to educate them about your point of view, or accept that we are human and can come to very different conclusions about almost everything.

4) Commit to following the rules. With a civilized, organized society comes the rule of law. As much as a citizen disagrees with the speed trap south of town, if caught driving faster than posted, he will pay the fine. If called to jury duty she will serve. If someone disagrees with a point of law you don't disobey it but work to change it.
As our society is structured, the Supreme Court is the ultimate arbitrator. Has the Court become as politicized as the rest of society? Absolutely. The last week has proven that point quite clearly. Is it time for a change in the Court's power, construction, or term lengths? Work to change the laws. A citizen doesn't have the right to disobey legal statutes he disagrees with, no matter how wrong-headed you view them to be. Otherwise, we face anarchy.

5) Commit to being committed. Being a good citizen is not a part-time job. You can't "turn it on" in an election year and then hibernate until the next one. As the points above should make clear, this is a full-time responsibility.


It isn't lost on me that this post is being published right after the 4th of July holiday period. I can't think of a better time to remind ourselves, that after the fireworks and celebrations, being a citizen of this country brings with it costs and obligations. If we don't take them seriously, we risk becoming a society that doesn't work for anyone, and a society we no longer recognize.