The Beauty of A New Beginning

One of the weekly prompts for my year-long writing course involved the topic of beginnings. A series of questions about times, places, relationships, and experiences were designed to get me to think about times in my life when something was fresh, a new route to follow, or a new experience that left a lasting impact on me.

That simple premise took me down several interesting paths, yet the one that triggered this post was not one of those new beginning points in my life that I thought would have so much significance. My dating and marriage, a career decision? A new hobby? Sure, those made the list, but are not what rose to the top. 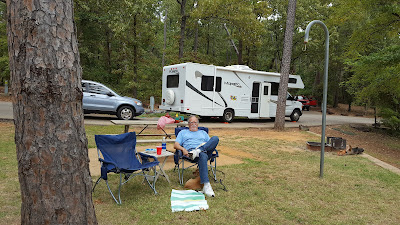 Becoming an RV owner and spending months away from home did. Being very much outside my comfort zone is something I normally avoid. Cautious is my middle name. Buying a 30-foot long metal home on wheels, learning how to not kill ourselves or others, understanding the complexities of dumping black water without covering myself in sewage, or backing into a camping spot without taking out a tree did not come naturally.

Betty and I had dreamed of getting away in a rolling house for several years. When we were first married we did own a Chinook, a very early type of mini RV that introduced us to the fun (and frenzy) of a mobile lifestyle.

Even with that positive experience, though, it would be over thirty years until the subject came up again (think loss aversion). After getting over the fear of spending tens of thousands of dollars on a used RV, we did it...we joined the RV people.

At first, the experience was intimidating. With no rearview mirror, I had to depend on the side mirrors and always being aware of other vehicles and where they were in relation to us. Planning ahead for exits from freeways, where the next rest stop might be, or how to get to our campsite for the night took being constantly "on." Piloting an RV cannot be done while thinking of other things. Even songs on the radio could become distracting if I was driving through a congested area.

Not knowing all the "rules" and common courtesies did take some getting used to. I still remember the first time I walked through an empty campsite and was told, in no uncertain terms, that was not done. I was to stick to the circular drive to get where I was going; no shortcuts were permitted. I never figured out why, but I learned my lesson.

No matter what anyone tells you, emptying the holding tank for the toilet does not come naturally, or easily. There are several ways of embarrassing yourself or needing a very hot shower. Finding out your drainage hose has a broken collar or a crack happens, usually late at night.

Over time, lessons were learned, roads traveled and experiences collected. Neither Betty or I ever second-guessed our choice or knowing it was time to bring this chapter to an end. The packing and unpacking, cleaning, repairing, and storing of the vehicle became reasons to delay trips. When that began to happen on a regular basis, we knew it was time to end things.

Over four years we covered nearly 20,000 miles, visited 32 states, and have enough photos to keep us knee-deep in memories for a long time. The urge to try something new, to risk a new beginning, paid off very handsomely.

It was the beginning of a beautiful friendship.

Note: As you read this Betty and I are enjoying a week at Disney World. She was there during the park's opening year, and really wanted to be part of the 50th anniversary. So, a Christmas present and birthday gift (today, Valentine's Day, is her birthday!) of this trip was a perfect choice.
I might be a little slow in responding to your comments, but now you know why. 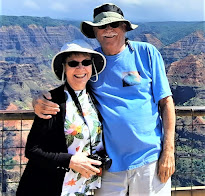