Moving Away From Our Comfort Zone

Over a year ago, I wrote about attempting to paint. For some reason, I found myself doing something I had never tried before. For years, I had told myself I had no ability in this area. Even with a ruler, I had trouble drawing a straight line.

Then I stumbled across a few paintings my father had completed during the last several years of his life. He had never demonstrated any interest in putting brush to canvas. But, something motivated him to give it a try; his works were quite attractive. He experimented with oils, acrylics, and even watercolor while taking classes and practicing in an art studio near my parent's retirement home.

I guess that was the moment when I thought, "If he could give it a try, then so could I." Searching the Internet, I ran across the Bob Ross channel. Famous for a technique of oil painting known as wet-on-wet, his silky smooth, calm voice promised that anyone could paint. As he said, "There are no mistakes, just happy accidents."

Even though he passed away in 1995, his "Joy of Painting" television series continues on many PBS stations. Every one of his episodes over a 31 season period is available on YouTube. With artist wife, Betty, urging me to give it a try, I stepped bravely into the world of painting.

Bob Ross makes it all look much easier than his technique really is for someone with zero experience. My accidents weren't all that happy. A range of mountains one time would look OK. The next time, they resembled an undulating brown blob with some white streaks that were supposed to be snow. My trees had very odd-looking branches. A cabin? It seemed about ready to topple over.

I stuck with it, partly because I had invested several hundred dollars in supplies, and mostly because I actually enjoyed the process. The completion of a painting might be met with disappointment at the outcome, but I found myself anxious to pick up a fresh canvas (or canvas board) and go at it again.

Over time, there was improvement. I allowed family members to see what had been created. To their credit, support was what I received, even if the end result was marginal. I knew there was some progress when Betty suggested (allowed?) that I frame a few and mount them in the living room.

About 15 months later, I can report the experience is still frustrating because my paintings have parts that look OK, coupled with sections that don't. Yet, I continue to look forward to picking up the brushes and trying another.

I have moved beyond just trying to mimic Bob Ross's style. Using the wet-on-wet approach for part of the painting, then switching to applying oil paint directly to a dry canvas gives me better control of the final look I want. So, I guess my technique is Bob Ross-Lowry. There is no Youtube channel yet, but I am having fun.

A few readers have asked if I am still painting, and would I consent to exposing a few of the more recent ones here. At the risk of public embarrassment, I am doing so. Not because any of these paintings are great, or even all that good. But, if I am to fully embrace the idea that a comfort zone needs to be ignored now and then, a demonstration is necessary. 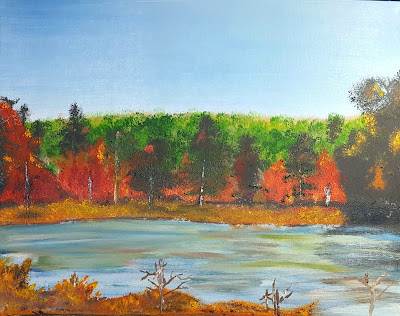 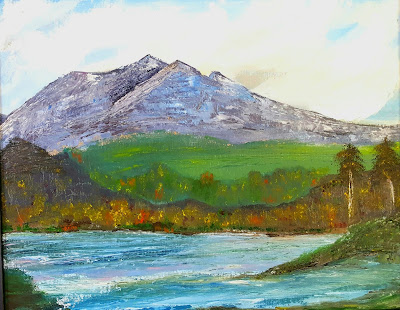 The point of this post is really to emphasize my contention that retirement offers us the chance to take a chance....on almost anything. A lifestyle change, a new hobby, different use of our time, learning a new language, a renewed dedication to fitness...whatever we think we might like to try, we can. For me, it has been painting. For you?

A comfort zone is a good thing for many parts of our life, but not all. If we allow ourselves to only stay comfortable in everything, how will we discover something that turns us on, something that brings satisfaction?