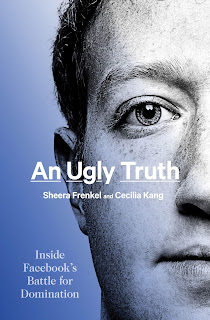 I just finished, An Ugly Truth, the story of Facebook's efforts to protect its user's privacy and prevent so-called bad actors from employing the platform to spread misinformation and deceive people. Well-researched and using sources from both inside and outside the company, the narrative paints a disturbing picture of a company that struggled to control the behemoth it created.

One camp of employees is fully committed to freedom for virtually all expressions of opinions and advertising messages, while the other is concerned about the potential for serious damage to democracy and privacy of personal data.

Watching the company leaders, employees, government officials, and Facebook users attempt to find the proper balance between freedom and protection is like watching a slow-moving disaster movie that affects pretty much the whole world.

Culminating with Russian and other hackers, stolen emails, bogus account ownership, propaganda, lies spreading like wildfire, and an internal system that chose profits over protection, the effect on the 2016 American election is painfully clear.

This post is not about Facebook, though I recommend this book for a deep dive into what can happen when almost 3 billion people are instantly and continually connected. More broadly, I would like to take a look at decisions we all make, almost daily about who can see, sell, and control our personal information. Problems can range from simply irritating like trying to sell us something, to outright dangerous like stealing bits of data that can end up with our credit ruined, even our Social Security number being sold to others.

Somewhere in the middle is the issue of changing public opinion on issues that dominate the news today: racism, feminism, LGBTQ rights. Facebook, for one, has been a major force in helping to publicize events as diverse as the Women's March on Washington in 2017 or the public demands for more freedom in Egypt  Giving people a way to connect can be a very positive thing.

Unfortunately, given the number of people involved and the lack of concrete guardrails to prevent misuse, propaganda, false or exaggerated "news stories," even outright lies. find their way on these same pages. Apparently, removing them before they do serious damage is not easy and too often not a top priority. 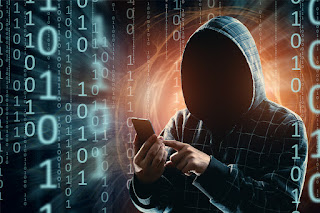 What I'd like to focus on for the rest of our time together, is the issue of our personal online privacy. Facebook is not alone, not by a long shot. Google and Amazon hoover up data at an unbelievable rate.

Twitter, Instagram, and WhatsApp (the last two owned by Facebook) exist because they can provide extremely detailed profiles of users to advertisers willing to spend billions of dollars in reaching us.

Banks, credit card companies, online merchants, even those sites that sell you funny coffee cups or T-shirts depend on what we freely tell them about ourselves, our buying habits, our demographics, education level, even our marital status or sexual preferences.

I have read enough on this subject to understand that living even part of our lives online means we will share things about ourselves. That is part of the arrangement we agree to: convenience and selection in exchange for something detailed about us. There is really no way to be completely anonymous and use the Internet.

I am not sure enough of us realize how much we are giving away each time we click. Nor, do I believe many of us know there are steps we can take to close the firehose of data if even just a little.

Facebook and Google both offer privacy settings that are at least steps in the right direction. While not easy to find, it is possible to protect parts of yourself online. I strongly urge you to not accept the default choices from mainstream browsers. Take the time to switch off some of the more intrusive settings. Of course, using a browser like DuckDuckgo or even Firefox is more protective of your privacy than Google's Chrome or Microsoft's Bing.

If you are more serious about building a bit of a wall between you and the data harvesters, a VPN is a good step. These Virtual Private Networks put you in a private network, away from prying eyes.

Foolproof? No. Better than the standard Internet. Yes. With your data encrypted and your IP address hidden, this is about as private as most of us would need to be. In some countries having a VPN is illegal, but not in the U.S.

A solid Firewall to protect you from many hackers and malware is a must. I have both anti-virus and malware software installed, with automatic updates keeping the latest versions in use. If you use Windows, make sure you install the latest patches and fixes. Attempts to penetrate software happen hundreds of times a day. Out-of-date software can be fatal. Though not as porous as Windows, Apple products are not immune to hacking attacks. The same rule of updates and extra software applies.

Of course, none of these common-sense steps matter if you aren't selective about what you post on social media. Remind yourself that a picture you upload, a comment you make, or a nasty remark you publish will stay somewhere on the Internet forever.

Sharing your full birthdate, the high school you attended, college attendance dates, or a list of all the places you have lived makes it easier for data thieves. Those personal details can create a direct path to your most personal information.

We can't live in fear, nor can we really be involved in life without the Internet. What we can do is be aware of what is at risk if we are not paying attention.  A long-time Facebook employee is quoted as saying, " [Social media's] effects are not neutral. "

As a character on Hill Street Blues said so many years ago, "Let's be careful out there, people."

A Retirement Reminder: Medicare open enrollment is now underway until December 7th. This is your yearly opportunity to change plans for supplemental coverage, Part D, and from or to Medicare Advantage programs versus traditional Medicare.

Go to Medicare.gov for more information.