My Painting Experience: What is The Verdict So Far?

A few months ago, I mentioned that I had begun to paint. More accurately, I had decided to see if I could paint. A chance exposure to a Bob Ross video on Netflix and the search for a new creative outlet led to this decision. I was convinced that my ability to paint something recognizable was about as likely as me qualifying for the U.S. Open. Since I don't play tennis you understand my thought process. No tennis, no tournament. No painting ability, no way.

Even so, the process of buying the paints, bushes, easel, canvas, paint thinner, and palette knives gave me a burst of energy, not always the easiest task in the midst of an endless Phoenix summer.

Finding 29 seasons of Bob Ross and his "wet-on-wet" painting technique on YouTube meant I was as close to paint-by-numbers as I could be and still claim some creative output.

Finding a place to actually put oil paint on canvas was a bit of a challenge. I ended up appropriating the dinette area of our kitchen whenever the brushes called me. As long as I didn't monopolize the space over a meal time, things were good.

Drop clothes cover the table and floor, an old blanket the chair. Then, out comes all the stuff needed. In thinking about it, maybe that has been my favorite part: arranging all the brushes, having a container to hold the paint thinner, pulling out little tubes of stuff named Sap Green or Prussian Blue, or Alizarine Crimson, squeezing small amounts on a plastic palette...fun! Almost like finger-painting, considering what my hands look like when I am done.

The cleanup is just everything in reverse, except messier, and takes just as long. In fact, come to think of it, the actual time spent painting is about 30 minutes; the setup and cleaning afterward about an hour.

At the risk of my tearing the scab off a wound that remains painful, here is the first painting on my first day of Bob Ross-lead inspiration. The sky has some ominous streaks, the water appears to be a solid, and the trees are in the throes of some sort of bark beetle infestation. 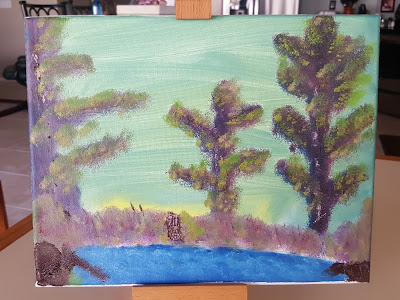 So, roughly 60 days later, what has happened? Have I noticed any improvement? Has my artistic wife stopped leaving the house to shop, or meet a friend, or whatever, when I pull out my box of supplies?

I suppose most importantly, I am enjoying whatever we want to call what I am doing. Painting is probably a stretch, but I do like the time spent in front of a canvas.

So, take a look at something from maybe 10 days ago. Yes, the sky is an other-worldly green. Betty says too much sap green that hasn't been mixed with something else. My light source near the center is coming from a very distant, or dying sun. But, and this is a big but, I now recognize actual tree shapes with trunks, some branches, and little smudges that somewhat resemble leaves.


I show you this out of a sincere desire to encourage you to try something new. Even if the results are as lame as these, I am surviving the embarrassment and some level of frustration of not being able to reproduce what is on the videos. Betty reminds me Mr. Ross had decades of experience to produce something in the 28 minutes of his weekly show. That may be, but, come on. Green sky?

I am writing this on a Saturday morning. The weather forecast promises I can move to the back porch on Monday to tackle my next foray into Van Gogh territory. Maybe all that fresh air and natural light will work wonders.

Probably not, but a guy has to dream.