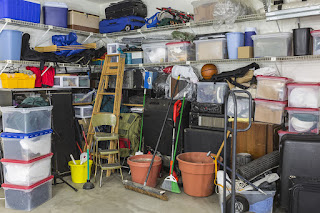 I saw a press release a few weeks ago that noted Americans spend an estimated $9.5 billion on unwanted Christmas gifts. Many are either returned or discarded. Over the years I am sure I have contributed to that problem. I remember the year I gave my wife a non-working blender. I remember because she reminds of that faux pas occasionally. I received a grey, homemade, Nehru suit from my mother-in-law many years ago. It was as ugly as it sounds. No way was that being worn!

The subject triggered a thought: What purchases have I made that I simply don't use? These were not gifts, rather stuff I bought on purpose. Either the "need" wasn't real, the product doesn't work as advertised, or that season of my life has passed. Too many end up in the garage or storage shed. Here are five that come to mind (I am sure there are many more!):

*Fitbit Heart Rate Tracker. This was one of the best selling items on Amazon this past holiday season. I know a few people who own one or want one. Shortly after my heart problem 18 months ago, I thought I needed it to stay safe.


It broke after a few weeks so the company quickly replaced it with another. No matter, I didn't wear it after a few months of obsessively checking my daily steps, heart rate, and estimated caloric burn. I just didn't think the product helped me. I knew when I wasn't walking enough. I checked my heart rate at the gym. And, the caloric burn wasn't accurate since I didn't enter everything I ate. And, it needed to be charged every few days or simply turned itself off.

I gave it to my youngest daughter who did use it, until it broke again.


*Food processor. At last count we have three of these, and can never remember how to lock the top part on the chopping section. That isn't a really big problem because our need for any one of the processors occurs about once every 4-5 months. These appliances take up too much room and are tough to clean, which is maybe why they sit unused most of the time.

A kitchen appliance tends to fall into the category of, "we don't use them much, but we might." So, getting rid of them is rarely an option.


*Laptop Computer. This is a very recent addition to the list of unused purchases. Probably 10 years old, my heavy, large, laptop sat untouched and uncharged for months at a time. It used to serve an important function: it allowed us to stay in touch and entertained on long RV trips.

Now the smartphone, Betty's newer and smaller laptop, and a tablet that does virtually everything a laptop can at less than half the size and weight makes the old workhorse irrelevant. It has left the building.


*Bluetooth anything. These products seemed like a good idea. Miniature Bluetooth speakers, connecting to the phone hands-free while driving, even speakers for the backyard promise easy connectivity without wires.

Maybe, but I just don't turn them on. Sometimes they can't seem to pair properly with each other. At other times, the battery drain is too high or the wireless range is not very far. Maybe I am missing something, but for me, it is a technology in search of a problem.


*Backyard Fire Pit. OK, so I live in a place that is hot 7-8 months of every year. A backyard fire is not often a welcome thought. But, there are a handful of times between December and early February when gathering around a crackling fire in the backyard would be nice.

If so, how come I have had the same three sticks of wood in the firepit for two years? Betty and I decide it is either too cold (?), too warm, too windy, to late at night, or too much trouble. So, the portable firepit sits unused in a corner of the yard.


What would you add to the list? Something you bought didn't turn out to be worth the money, or your interests have changed. An appliance that seemed a perfect addition to your life, sits ignored and unloved.

Part of living in a consumer-oriented society is owning things that become a burden, not a joy. Share your burdens!