Downsizing To a Forever Home

One of the bloggers I enjoy following is Barbara Hammond. Zero to 60 and beyond is a lively chronicle of her retirement journey.  More than that, it is a place she shares details of her turbulent and difficult childhood, a journey soon to be turned into a book.

I look forward to her thoughts and beautiful photos on Facebook.  At one point I discovered that she and I actually worked at the same time for competing radio stations in Pittsburgh, she in sales and me in program consulting. Small world!

After too many moves to catalogue, she and her husband made a dream come true: they moved from the big city to a small seaside resort town at the southern tip of New Jersey. I asked if she would give us an overview of what that journey looked like and some of the adjustments she had to make to downsize to a smaller town.

"I didn’t see an ocean until I was seventeen. I had lived on the edge of Lake Erie my entire life. It wasn’t for lack of moving that I hadn’t reached the outer edges of the country. I attended fourteen schools in twelve years which required lots of packing up and moving and starting over, but never far.

My first airline flight was to Boston with my future husband to visit his family for Easter in 1968. It was exciting and eye-opening for me to observe a family right out of a Norman Rockwell painting, if you compared them to mine. Six months later we were married.

Dave, my husband, had gone into the same retail company his father worked for. The company had been good to his dad and he felt it would be solid ground to plant his flag there for our family.

Our first stop was Scarsdale, NY. Dave was an assistant manager in a five and dime, in the most expensive housing area in the Continental U.S. it was challenging, to say the least. We managed to find a small garden apartment one town over. Thanks to S&H Green Stamps my mother-in-law sent us religiously and donated pieces of furniture from friends and family we got by.

Dave was transferred annually in the beginning. We moved ten times in ten years. No small feat with two small children. We were all over the East Coast but, Philadelphia was our favorite place and that’s when Ocean City, NJ became our family vacation destination. They say your first shore town is the one you always go back to. That was definitely true for us. We drove to OC, from wherever we were, for two weeks every summer.

We moved back to the Philly suburbs in the mid-'90’s and stayed in one house for six years. When the kids were grown and flown we were over the big house so we decided to move to the city. We enjoyed city life and started renting a place in Ocean City every summer for the season. I was determined to buy a summer home there though Dave was sure it couldn’t happen.

One day the Realtor I had been working with for years called and said, “Barbara, it’s your lucky day!”

Well, I hadn’t wished that to be the way we would find our new home but, I wasn’t going to look a gift horse in the mouth. It was a duplex, which meant we could rent one unit while enjoying summers in the other.

We soon discovered it wasn’t all that fun being the landlord. When you live upstairs renters think you are their concierge. People complained when it was raining and one woman was upset because there was sand in the windowsills (remember, this was at the beach!) We found out we could condo the building and sell the downstairs. It was the perfect solution.

When Dave retired we spent more time at the shore. The kids visited less due to sports and school activities. Dave’s dad, who had his own apartment in our city house, went into senior housing and we started discussing ‘what next’.

In the spring of 2014 we spent a lovely day in Cape May, which we did several times a year, and on the way back to OC I said, “Why don’t we sell both houses and move to Cape May?” Dave took about ten seconds to say, “I like it!”

We immediately put the wheels in motion. Our house in the city sold in three days. That’s a world record for us and we saw it as a sign. The OC house took most of the summer but, we needed the time because we hadn’t found ‘our’ house in Cape May, yet.

By the end of the summer, the perfect house appeared in West Cape May. It was destined to be ours and by mid-September it was. We immediately jumped into doing renovations and in a couple of months it really was ‘ours’. 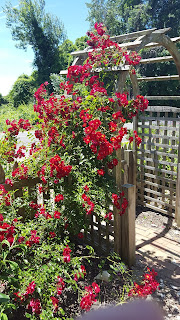 We can walk or ride bikes to the beach, or the bay, to downtown Cape May and to Cape May Point. It feels like living in the country at the beach. We inherited a fabulous garden and Dave loves tending it. I enjoy cutting flowers to fill the house. The dogs have a picket fenced yard to play in and lots of windows to nap in front of while they pretend to guard us.

The down side, if there really is one, is the nearest Target is 45 minutes away. We do a lot of shopping online now, but probably spend less, so not a bad thing. It’s less than two hours to visit the kids. One is in Philadelphia and the other in Baltimore.

The population changes drastically here from summer to winter. The average in summer is 50,000 and drops to 4,000 in winter. You have to carefully pick the days and times you want to grocery shop during the season, for sure. But, once you figure it out it’s not a big deal.

Ocean City was not a year ‘round option for us because there is really no life there in the winter. The island is long and spread out with no concentration of population in winter. It’s a summer resort town. 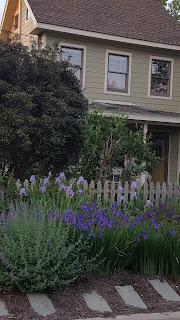 Cape May is more compact and there is plenty going on year ‘round. There’s a lively music scene here plus a Fall and Spring Jazz Festival. There are great restaurants, too. But, we did learn that by October it becomes ‘Cape Maybe’ at times. The local pub says it’s open Thursday thru Saturday but ‘maybe’ not. The plumber says he’ll stop by before Friday but, ‘maybe’ not. We’re adapting to what is.

It’s been two years now and we couldn’t be happier. I think we found our forever home and, I guess the moral of the story is, it’s easier to downsize into retirement when you’ve moved a gazillion times before."


A nice ending to Barbara and Dave's satisfying retirement journey. Trading some convenience for living where you wake up happy each day is the choice the Hammonds made.

Makes all the sense in the world to me!

My Satisfying Retirement is a slightly different title and represents a shift in focus. Instead of being all about the nuts and bolts of retirement, I am writing more about my personal retirement journey as it continues to evolve and unfold. Topics that strike me an interesting, important, helpful, or maybe just a bit of whimsy will be featured. As always, I am open to your ideas for topics you would like me to address. The email remains the same, so feel free to write to me whenever you choose.

Over 3.97 million clicks. Your continued readership is deeply apprciated