Where is Ajo? What is Ajo?

Ajo (the Spanish word for garlic and pronounced Ah-hoe ) is a small town in southern Arizona, about 45 minutes from the Mexican border. A former copper mining boom town, Ajo is now a rather peaceful home to 3,500 retired folks, Border Patrol officers and their families, and a small community of artists.

Why the review of Ajo? Because that was the most recent trip Betty, Bailey, and I took in our RV. With the weather an absolutely perfect 70 degrees and plenty of sunshine, we decided to just pack up and go for two nights and three days last week. Those are two of the nicest things about a satisfying retirement: no schedule so set it can't be broken, and an RV sitting in the side yard, gassed up and ready to go anywhere. 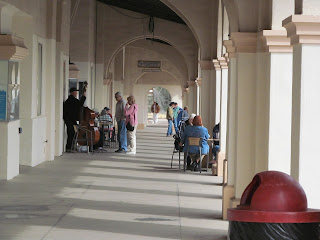 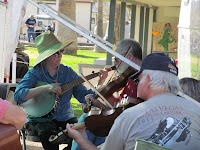 By pure luck, the days we picked to visit Ajo were  busy. A Fiddler's Competition was underway at the Community Golf Course and an Artisan's Festival filled the town plaza.


The weather was just right for visiting the gigantic, now-abandoned copper mine just south of town and peak inside the nearby Historical Museum. 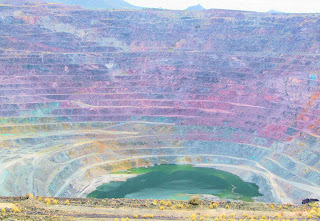 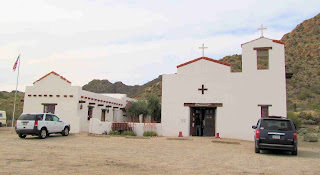 The citizens of Ajo have done something very special with a large, abandoned school complex just a few blocks from downtown. Known as the Curley School, this seven building, 8 acre complex is being converted into art studios and galleries, as well as loft apartments that are home to all sorts of artists. The conversion began officially 3 years ago and is well underway. 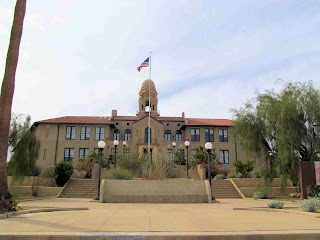 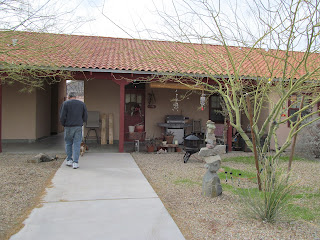 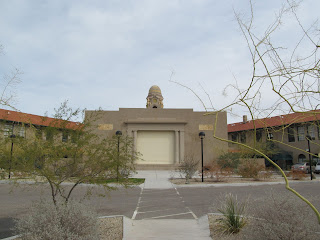 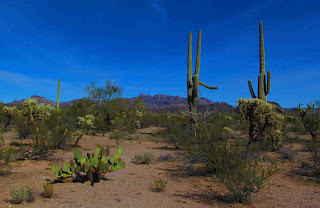 Just 6 miles from the Mexican border Organ Pipe Cactus National Monument is a place we have never visited. At 330,000 acres this massive park is full of hiking, biking, and driving trails. Over 28 different species of cacti are represented within the park.

Ranger programs, campgrounds, and plenty of wide open spaces for RV dry camping or just enjoying the silence are available. Interestingly, because Organ Pipe Cactus are very sensitive to the cold, they are only found on some of the warmer, south-facing hills in the park.


The third largest National Wildlife Refuge in the United States, Cabeza Prieta, is just north of Ajo. Over 90 percent of the area is off-limits to vehicles, helping to preserve the natural beauty of the park. Also, the refuge lies within the air space of a very active Air Force Range. In order to enter to have to sign a waiver in case a jet lands on your tent. But, on the plus side, camping is free, although potentially a little noisy!

Betty and I were pleasantly surprised by Ajo. While a large portion of the commercial section is too full of empty storefronts, the effects at the Curley School, the presence of the Border Patrol headquarters for this area just south of town, and the continuing downtown plaza redevelopment bode well for the town's future.

The RV park was quiet with an easy pull-through spot for R.T. Away from city lights the night time sky was so full of stars that were so bright I felt as if I was at a planetarium. It was breathtaking. The stars seemed so close I thought I could touch them.

We tried something new this trip: using a mini slow cooker to prepare a pot roast dinner. We put the crock pot inside the kitchen sink and let it cook all the way to Ajo. By dinner time the tremendous smells let us know everything was ready.

So, a perfect getaway. The total cost was $170, of which 65% went to gas. A satisfying retirement can be built on a little money and a lot of freedom, even in a place with a funny name like Ajo. 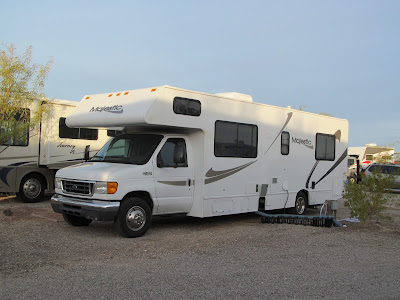